See these articles for more information on the project!

December 1, 2018. Variation Makes all the Difference for Researchers

June 4, 2018. Greenbacks for a Greener Planet: Will Producers Buy In?

March 1, 2018. Conference Over Down Under, But Benefits Live On

October 31, 2017. Animal Welfare and Dairy Genomics: Attitude is Everything

December 29, 2016. This article in the Western Producer looks at the commercial dairy farm in Alberta that is partnering with the project to collect high quality data on feed intake of lactating cows!!

March 31, 2016. Methane Emission Genome Project Measures Up "Down Under"

On February 6, 2017 Dr. Filippo Miglior joined a group of prestigious researchers on Parliament Hill in Ottawa to showcase their projects and illustrate how they are using genomics to address important issues in Canada related to climate change. Dr. Miglior's poster (find here) showed how this project is using genomics to reduce the environmental footprint and increase the productivity of Canada's dairy industry.

August 2016. A BIG CONGRATULATIONS to Filippo Miglior on his most recent award from the Canadian Society of Animal Science (CSAS) for Technical Innovation in Enhancing Production of Safe Affordable Food for 2016. This was awarded at the 2016 Joint Annual Meeting (JAM) in Salt Lake City, Utah, July 19-23. For more information, see here! 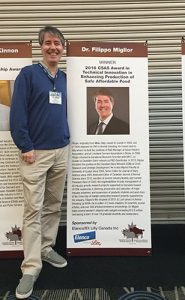 Come see us at the Western Canadian Dairy Seminar (WCDS) in Red Deer, Alberta from March 7-10, 2017!

The 7th Annual Livestock Gentec Conference, October 18 and 19, 2016 in Edmonton, AB. This year's conference included beef and dairy topics. Filippo Miglior gave a presentation on the project. See here for more details on the conference.

EAAP Meeting in Belfast. August 29 - September 2, 2106. Filippo Miglior gave a presentation on the project, entitled "An international initiative to decrease the environmental footprint of dairy cattle using genomics". In addition, a presentation was given on the work Filippo's group is doing with ICAR to standardize data collection and data analysis for feed efficiency and methane emissions. This work will ensure that data coming from the EDGP has maximum value.